Today was a sore day, but regardless of my own personal desire to lie around all day feeling sorry for myself, we had to go out. Toddlers are strangely unconcerned with a parent's need to do nothing and the prospect of trying to contain Small in the house while feeling off was not to be borne.

I struck upon a marvellous idea, something that would delight Small no end but require little exertion for myself, a trip to the Kirklees Light Railway! We'd not been before but I was vaguely aware of it. Little wee steam trains that trundle away up 20 minutes worth of track in the south pennines from Clayton West to Shelley then trundle back again. Both ends of the track have a tea room, picnic area and a playground. The Shelley end has a wee bouncy castle that was free to use and the Clayton end has a miniature railway ride, a party carriage, gift shop and duck pond. You can even buy bags of duck food if you want to feed the ducks which is nice. 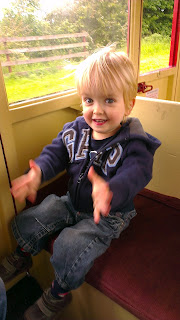 Under 3's are free, which is good but adults are £7 a return fare which is not exactly cheap but not the dearest thing we could around here either. We took our lunch with us so that was the only spend we had for the day.

Small loved it. Trains are HUGE for him so I knew it would go down well but he adored every bit of the place. Was barely interested in his sandwich because he wanted to play on the train in the playground, then massively excited about the actual train, the toot, the smoke (train clouds!), the journey, the tunnel! Happy boy, as you can see

The tea rooms all have little wooden tables with little wooden Thomas The Tank Engine train sets fixed on them so D was right in about there and we had a few tears when it was time to get back on the train as he didn't want to leave them but a couple of chugs along the track and he was smiling again.

On a warmer day I think we could have made much more the day and spent a lot more time there but it was chilly and Small was in much need of a nap so we headed off and Small was fast asleep in his car seat within 5 mins of leaving, he stayed asleep in the car (with Big) the whole time I was in the supermarket getting our food shop in too.

It's not the National Rail Museum, but it's much closer and frankly, rather better for a two year old train fan than the NRM anyway. We will be going back.
Posted by womanontheedge at 20:12