Yeah, I'm a little edgy today. Edgy enough for it to be one of those days where teetotalism shows it's drawbacks.
Without getting into it too much, I'm waiting for news. I don't know exactly when it will come - "early part of the week" I was told - and I don't know how it will come exactly and it's driving me insane.
I've been pacing the house like a bored tiger in a zoo and at times, been about as approachable. I don't even know what I want to hear for sure but I have a feeling I want the good but hard news rather than the bad, easy news. I'll know for sure when I hear.

As it is, I spent the day restless, preoccupied and tense and will probably do the same tomorrow. Big demonstrated exactly why I love him so much as I do when he innocently shared this - 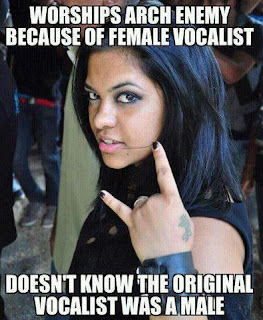 - on his podcast page and got 10 mins of the Scottish Inquisition. "Why is that pic indicative of that caption? Eh? Eh? Can women, especially not young, attractive women, know anything about the bands they like? Are they all vacuous airheads who fake liking bands for cool points or just incapable of being real fans? Huh? Huh? HUH?"

Of course he doesn't think that way, even if I still believe the makers of the meme probably do, and he gets extra kudos for not telling me where to go and what to do when I get there. But I was in dire need of a vent and it was a wonderful excuse.

A good rant soothes the soul.
Posted by womanontheedge at 20:53