So busy that I'm shattered and almost completely forgot to blog! So don't intend to be chatting long tonight.

Small must have known on some level that his Tumble Tots class was back after the half-term break as he helpfully got us up at 6am. Well, I say got us up, to be honest I couldn't quite crowbar both eyes open so just went to get him and brought him back through to our bed in the hope he'd nod off again. Nah, after 20mins of hope inducing periods of stillness followed by mammoth wriggling and the odd foot in the face, he started demanding Cbeebies and all hope was lost.

Tumble Tots is a mixed bag for us. It's a 45min session with some 15 or so other toddlers where they sing, dance and clamber over obstacle courses. Small doesn't get much socialising with kids his own age so it's good for him on that level and he does love climbing and playing with the hoops and things BUT it's at 10am in the morning and held in a dance studio which is really echo-ey and the combination of over a dozen yelling toddlers, a sound system for songtime and the fact that having been up for four hours already and hitting that point where he's not quite ready for a nap but hasn't quite hit his second wind yet and Small can get a bit overwhelmed at times. Especially when he's really enjoying a particular obstacle course and the time comes to change to the next one. He always brightens up for sticker time though and with every passing week he's less and less grouchy and more and more confident, which is lovely.

Now, normally after TT's we hang around in the building it's held in as it also contains a council subsidised cafe and the biggest soft play gym in the area but today we were on a schedule. There was an open day at a nursery I *might* have need of soon and I wanted to take the opportunity to check it out. For one thing, I have no idea about nurseries and up until this week was plodding along thinking I had a good year before I really had to worry about it. Happily, I loved the nursery and would actually consider finding out if I can just go there for a few hours a day myself and play in the sandpit. It's a lovely place with forest school aspects which Small would really enjoy and best of all as soon as we arrived he just toddled off and found the toys without a backward glance. When we went outside he made instant friends with a male play leader and didn't care in the slightest when we went off to view the older children's playgroup areas without him. Well, there were diggers and people building a bug hotel at the bottom of the garden, why would he want us? Came away feeling much more positive about putting him childcare than I had done. 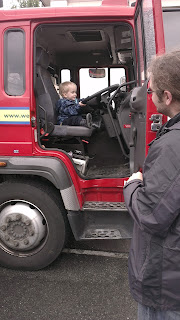 But we still weren't done! No, we also had to attend our local fire station's fund raising Fun Day, mainly because Small has utterly destroyed his 'fire engine hat' - toy firefighters helmet - and we needed to pick up a new one. Small also had a go sitting in the cab of one of the engines -   and we grabbed a hotdog lunch into the bargain. Also picked up a sweet storybook in the shape of a fire engine complete with actual wheels.
The event was actually pretty cool, with stalls and fun fair rides, trampolines, face painting, raffles and a minature fire engine thing that was giving kids rides around the car park, it was also heaving despite the nasty weather but sadly payday isn't til next week, we're skint and Small was really needing a little sleep so we didn't stay too long.
We packed Small back in the car, he nodded off almost right away so we hit the road again! 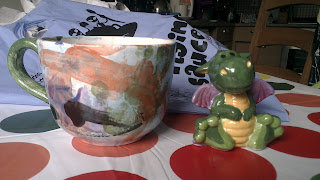 This time away to Hebden Bridge to pick up our now-fired pottery that we painted on Tuesday. Exciting! Big loves his big splodgey coffee cup, messy and muddy and silly as it is with our gorgeous son's messy, muddy handprint slapped firmly on the side and all their joint squiggles in several colours. He says he will keep it forever and when Small is a big, horrible teenager inflated with bravado and testosterone he hasn't yet learned to control and has friends round, Big will bring it out and ostentatiously drink from it. Love him. 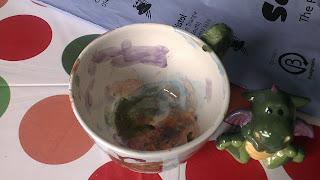 What was I saying about not making this a long entry? Arg, sleep calls.
Posted by womanontheedge at 21:55