Big deserves a good Father's Day. For all my complaining about his lack of helpfulness around the house and general laziness, it's not a calculated thing. He doesn't plan to leave it all to me, doesn't think it's my "job" or anything like that, it's just that things either don't occur to him or he just puts off doing it himself until the last possible minute, by which time I've already done it, albeit with crashes and bangs and slams and mutterings. He's also not having the greatest time in the world either so I understand he's not exactly springy with the desire to be up and at em.
He is however, a wonderful Dad. There's nothing in his life he puts before Small, no emotion is hidden, cuddles and kisses and love abounds from him and Small adores him right back. From the evening of Small's somewhat dramatic entry to this world, Big has been a Daddy with a capital D. There are few things in my life more enjoyable than spending time with them both together and watching them interact. That's why I call them Big And Small, after the kid's tv show with the big purple puppet and the little orange puppet both voiced by Lenny Henry. If you've ever seen it, that's how they mostly are. Big moving slowly around the house or wherever and being followed by a hyper, excited, microscopic attention-spanned Small, constantly calling after him and talking him into bizarre adventures (in our case, usually involving dinosaurs and diggers). I'm not saying he's the perfect Father, no more than I'm any sort of perfect Mother but he's the best he can possibly be and tries to be even better, what kid could ask for more?

I digress. Oh yes, Father's Day. I thought a good wheeze would be to get Small to decorate a coffee mug for Big, my first idea was to sneak off to a local-ish ceramics cafe place and get it done ready to present to Big on Sunday. I was thwarted in this plan by two factors, firstly that Big is not at work at the moment so sneaking anywhere with Small is impossible but also, the place I intended to go in Halifax, which I can get to by train, appears to be closed. Damn.
Not disheartened, I had a realisation. It would be far better to scratch the surprise element and make it a day out. Much better idea and Big thought so too especially when I threw in tea out at a burger joint too. We remembered another paint your own pottery place we'd seen over in Hebden Bridge and we further reasoned that waiting until actual Father's Day to do such a event may be a bad idea, possibly everywhere would be rammed with families and we're none of us big fans of crowds and waiting. So we went today.

Hebden Bridge is a wonderful place, possibly the only place around here where me with my Wildhearts messenger bag, erratic demi-goth dress sense and eyeliner overload can walk with Big and his wild hair, metal band t-shirt and hoodie and our crazy child can walk together without attracting a second glance. In Hebden Bridge, we're boringly mainstream. It's a pretty little Calderdale Valley town, home to an unusually high proportion of the LBGT community and a bit of a well-heeled Hippie Heaven. Think Glastonbury but without the mystical tourist trap element. I love to visit there but can rarely afford to buy much. We had a wonderful morning in Flying Saucers, Big selected the biggest coffee cup I've ever seen as his item and he and Small set about splodging pottery glazes of all colours all over it. 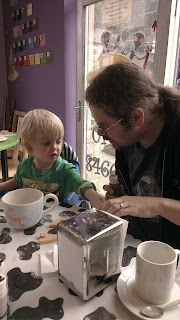 I picked out a cute little baby dragon figure to keep me occupied while they worked. Being me and slightly obsessive about anything creative or craft related, I was still painting my little dragon when the boys were done so they had a toddle outside by the canal while I finished off. Much fun had by all. We can go back and pick up our creations over the weekend, once they've been fired and when we do, I'll be having a proper visit round the town into the bargain. Once all done and paid up we headed off for lunch. We all ended up eating our own bodyweight in burgers (Big) philly cheese steak and sweet potato fries (me) and fish fillets, potato faces, crudite and ice cream (Small) and finally returned home to spend what remained of the afternoon wallowing in happy repletion.
Not a cheap day for me by any stretch of the imagination, but a truly fantastic one.
Posted by womanontheedge at 20:42