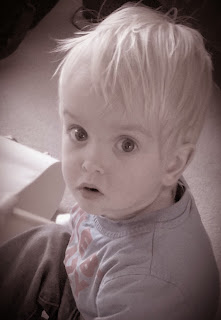 I'm so lucky to have my son. To say nothing of the manner of his arrival in the world (more on that tale some other time) and how close I came to not having him at all, he's a wonderful kid.

Oh yes, I know. Everyone says that about their kid. But he's an absolute delight. I love this age, I know people say Terrible Twos but it's not bad. Yes there's tantrums over the most trivial things but you get them for the same reason you get pure, unadulterated, unselfconscious joy at just as trivial things. Because they're not trivial to him. Sure it's exasperating when I'm tired and sore and fed up and he's face down on the kitchen floor sobbing his heart out because I won't let him play with the sharp knives and yes my temper will fray and I may well insist Big just takes Small out of my way NOW. That's because I'm human, not that I feel much better for it at the time. But the endless entertainment opportunities offered by a cardboard tube, by a tin and a spoon, by a strand of spaghetti... I wouldn't trade them to never see another tantrum. When was the last time your life was made complete by being entrusted with carrying a birthday card to the post box and posting it? In Small's world, today. He's also discovered the concept of hide and seek, which to him means turning around to face away from you and screeching "HIDING" until you start to count. Then mad giggles when you reach ten and yell "FOUND YOU" Tonight, he ducked down in the bath and hid there.

He's a Daddy's boy. When Daddy is home Mummy is old news, this hurts. At 3am though, only Mummy will do and for some reason I am not comforted by this, I'm probably too tired and too jealous of my soundly snoring Big to be comforted. He's not a cuddly boy unless he's poorly or coming round from a nap and only kisses goodbye, not just for kisses sake. The only time he's expressed the emotion of love was when he got a ride-on digger but it all just makes the few kisses and cuddles I am gifted all the more precious.

He apologises to strangers in the street for getting in their way. He says 'not so bad' when asked how he is and 'yesi'mfine' when asked if he's ok. He smiles all the time, unless there's a camera pointing at him, he helps with the washing up, he yells TUUUUNE when he hears ZZ Top or Metallica on the radio. I honestly can't think what I did with my life before he came into it, but it probably wasn't worth it.
Posted by womanontheedge at 19:54