From here you can smell summer

It was a very seasonal day today, it rained a little early on but by late morning it was sunny, warm and with a warm breeze. The last day I remember being this warm was back in the freakishly warm days we had at the end of March. It's been a long wait through some trying times.
This week in particular has been no fun at all what with my insolent ribs (seriously, you don't realise how much you move your ribs until they start telling you loudly if you so much as disturb them by breathing) and Small has been getting bothered by his molars so it's a pantomime at bedtime then wakefulness every hour through the night when he decides he wants a cuddle culminating in him joining us in bed at 5am and proceeding to alternately snuggle for 5 minutes then start yelling and complaining and trying to kick us in the head. Or in my case, because he's EVIL, kick me in the ribs. And then I had to go to work. Bleah.

But today... it was warm, D slept with only two wakings and didn't get us up til after 6am. I felt good enough to try leaving off the codeine and after Big was done with his Thing this morning a little of his personal black cloud lifted a bit too. Back in the days when we had no child and a smaller mortgage, Big and I got our weekly food from a lovely farm shop over Wakey way. In the intervening years they've developed the site a bit and now sport a restaurant too so we went over for lunch. They have a great children's menu too so Small got a picnic platter of crudite, thick cut ham, chargrilled chicken, cheese and bread while me and Big had a burger. Small charmed the surrounding diners and waitresses, ate (fairly) nicely and we went down to the shop to pick up a few snacky bits to have for tea tonight. Also got some stuff for a friend who lives nearby and has had an even worse week than us and dropped them off.

The threatened showers never happened so we went on to the Yorkshire Sculpture Park which is a wonderful place on a nice day. Rolling fields filled with grazing sheep, the odd migrating flock of canada geese, rabbits and  Henry Moore sculpture. Not just Henry Moore, but those are the stand out pieces. Small was in his tiny blonde element, exercising his 2 year old's right to say hello to everyone he met, from humans to ladybirds and including every single sheep. The only slight issue with this is that he expects a reply and prepared to wait for it.

Wonderful day, just wonderful. Small even went to bed without a fuss for the first time in about a week. I'm not one to moan about rain. I'm from Aberdeen, if I was raised to moan about bad weather when it happened I'd never be doing anything else ever. I do like the warm though and I like the serendipity of everything coming together when the warm sun comes out. Perhaps it's just my perspective that changes but while I have no problem with the rain, things just roll better when you're not shivering. 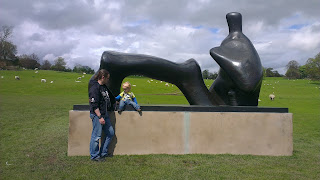