It's about this photo - 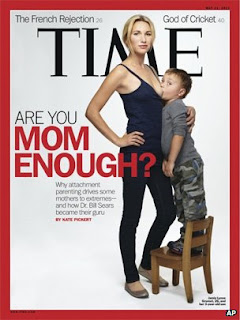 Not the article it accompanies, just the photo. The Time article is about attachment parenting but I don't subscribe to Time so can't read it to see if it's positive, negative or ambivalent but the photo, in my opinion at least, is negative.
I am not an attachment parent per se. Small was prem and spent his first 3 months in hospital, at first on a respirator. What with one thing and an other, he never got the hang of breastfeeding and although I expressed for him at first, by four months I couldn't keep up my supply and switched him to formula. Co-sleeping, no by the time he came home he was used to sleeping alone in his own space so slept in a moses basket by my bedside until he was 9m and grown into his cot. Once he was off oxygen we did do a bit of babywearing and it was wonderful, much better than pushchairs and we continued that way until he was too big for me to carry comfortably in a mei tai. I don't agree with everything AT parenting suggests but I do like the central idea of allowing your child to set his own agenda. It just so happens that the things that Small likes are more... conventional.
Anyway.
Despite my own experiences, and I could write at some length about my experiences, I do completely support breastfeeding. I'm not sure any child really needs to keep doing it once they're a year old and eating all their meals and snacks in solid form but I don't think it's wrong to keep going either. Why I wish the above photo was different is that it's provocative. It seems to set out to get a negative reaction from people. Not only does the child look a good bit older than his 3 years and his mother look like a hired model but there is nothing maternal about the pose. Neither person is paying the other much attention, there is nothing to demonstrate a bond, it's so cold the two could almost have been photoshopped together and never met. Anyone viewing that as their first exposure to extended breastfeeding is not going to see much good about it.   It makes extended breastfeeding a freak show and therefore puts more pressure on breastfeeding mothers. Now they not only have to deal with the difficulty of the first weeks, the mix of attitudes, the whole issue of public feeding but now you have to start thinking about when you're going to stop in case people start equating you with those 'weird, nutjob extended breastfeeders'. For crying out loud, just let parents make the decisions that suit their own, individual child without any more meddling from the media.

So it doesn't matter actually what the Time article says, what slant it takes. Far more people are going to see this photo than read the article anyway. And people being people, they'll draw their own conclusions from that photo too.
Great job Time.
Posted by womanontheedge at 14:02