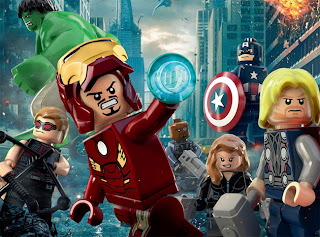 While in many ways I don't really want Small to grow up at all, I am looking forward to him being old enough for Lego. He has Duplo at the moment and some absolutely supercool Disney Cars Duplo that he loves but when it comes to playing with the actual blocks he just upends the box, sits in the middle of the mess and demands we make him a space rocket or a helicopter. Try making that out of a set of blocks designed to make a few basic walls with windows and a garden. He'll get there though.

I have fond memories of lego from my own childhood. In particular I remember a set that built a pretty wee house but I'm sure I had other stuff too. I'm aware that I shouldn't love lego. I should boycott it because it does girls sets that are houses and beauty parlours in pink and purple. Sod that, I've always loved lego and I will just not buy that stuff. There's plenty of other options out there. I actually have some already, Big bought me a wee Pirates of the Caribbean set and I'm slowly building a collection of lego figure keyrings. I very much want my own Thor and Ironman now too!

I don't really know for sure where I stand on the whole 'girls toys' thing. I get that it sells. I get that it's wanted. I get that companies don't particularly want to force women into subservient roles but do want to make profits so they produce what will sell. I understand that the above mentioned range of lego sold very well when previously the same age group of girls had lost interest in the unisex ranges already available. Further to that, I played with Sindy and Barbie as a girl and preferred Barbie (my sister was a Sindy girl though) I had My Little Ponies and Care Bears and Girls World heads and baby dolls and pots and pans and Jem, oooh yes, I loved Jem. I still grew up to be this free thinking, independent woman before you.
Small has a toy hoover, toy brush and mop sets, toy kitchen things, he mugs me frequently to "help" with the cooking or cleaning, especially the washing up. He loves all that. He also loves his trains and his cars and digging in his sandpit and his diggers.
At the same time though, I'm repulsed by how a delve into the girls bit of a toy shop reveals a world of pink plastic. It's almost impossible to find anything that isn't pink. Mainly the stuff that isn't pink is lilac. Clothes shops the same. You can get scooters for five year old girls with a wee drawer in the footplate stuffed with make up. Why? And the difference between this trend for putting make up in otherwise genderless toys and Girls World is that with Girls World, you put the make up on the dummy. You did the dummy's hair. It was playing at being a grown up in a way that didn't compromise your own childhood. Giving five year olds the idea that they need make up, need to wear it, need to accelerate through their infancy to teenage as quickly as possible is pretty repugnant, to me. It's that, and the lack of choice that bothers me. Perhaps that's why the lego is ok with me. For one thing, I've never seen lego suggest that the rest of their product range is for boys and this is the girl's stuff. They've just filled what they see, and sales would suggest is, a gap in the market. For another, it's just toys, it's just playing. It's not building your own make up valise or push-up bra.

But mainly it's because I want to supply Small with a world of Indianna Jones, Star Wars, Toy Story and Avengers sets. I'm a consumer dammit.
Posted by womanontheedge at 19:48