Yes, I'm reading A Song of Ice and Fire at the moment (Game of Thrones) so the title came easy.

It is though and the change of seasons is more pronounced than the spring/summer change was. The air is chill, although it doesn't yet have the bite that will come in another month or two. The winter pansies are in bloom, the leaves are starting to turn, it's damp and misty and the nights are noticeably drawing in.

I love summer, but I love autumn too. All the seasons have their place, especially when they behave as they are supposed to and of all the seasons, you can pretty much rely on Autumn being Autumn.
It's a good time, cheery lights brightening the dark nights, warm homes to come in to, hallowe'en, bonfire night, stews and soups and harvest foods, comfort foods. You can enjoy all the benefits of winter before it gets too hard and dull and the novelty's worn off. Then of course there's the slow meander through early winter and into Christmas. The whole time is steeped in traditions and customs that remind you of how much easier our lives are now, how this time used to be a time of preparing to literally survive until spring. Of course, many wouldn't survive. Bonfires are about more than Guy Fawkes, people lit bonfires at that time of year long before he walked into Parliament with his honest intention. Fire was important, fire was the difference between life and death. We're lucky that the worst we have to face in winter now is the odd day where the buses and trains don't run. I think we often forget just how lucky we really are.

Oops, didn't mean to get melancholy, this is what Game of Thrones does to you. It's a happy time really, at least for me.
In deference to the Equinox, the season shift and the harvest, today I have baked an apple cake, the recipe one I got from a friend who lived in Sweden for a time. I haven't eaten it yet, it's for later but because I made it, it's heavy on the cinnamon and smells wonderful. Yum Yum. 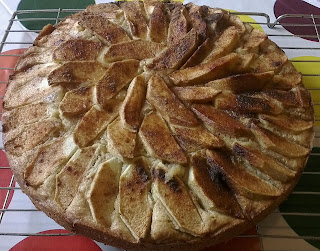