Who needs to run?

Well frankly, not me.

I've sacked it off, for now at least. The doubts I discussed after completing the first week of the programme didn't really get resolved and then I found that Small wasn't as adverse to finding himself back in the pushchair after the summer break as I feared and when you're pushing a two year old up hill and down dale through Huddersfield for a couple of hours a day, there is neither the need nor the inclination to then haul yourself out for a run as well. I'm comfortable with that.

Besides, the walking isn't all I'm doing. Now Big is firmly back at work and not messing the place up, I'm slowly but surely reasserting some kind of order into this three storey Clutterfest of Doom. On top of that, I'm keeping a two year old entertained and cooking daily meals. I'm busy. Today I cooked not only for today but for the next two days as well, this was after the two and a half hour tromp around town (where I actually remembered to book a contact lens check up and if I remember to attend it too, will have averted them stopping my direct debit and washing their hands of me entirely)
Not content with this for a day's activity, after Small's nap we also did some painting.
Small loves painting. Or I should say, Small loves getting all the paint stuff out, covering every available surface, including himself, in a blend of all colours of paint then dropping all the paint things on the floor and asking to get down. Why yes, he is only allowed to paint from within the confines of his highchair, I'm not an idiot. Not entirely anyway.
It's usually a very messy way to fill about 30-40 mins before he gets fed up and wants to do something else and it's sort of awesome to just resign yourself to the fact that it's going to be a big clean up, do what damage limitation you can and let him go for it. Just on occasion.
So yeah, don't really need to run. 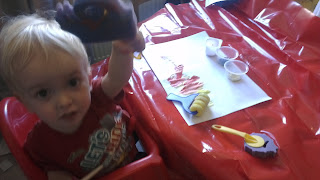 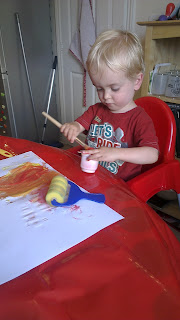 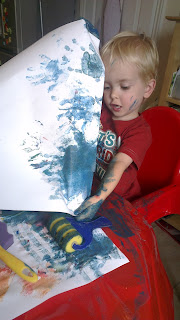 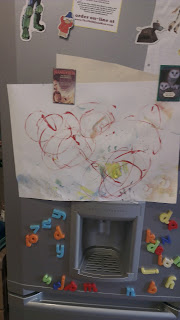