Of Bugs and Boys

I was going to write about the turn of seasons today but I can't now, I have to talk about my kid.
Again.
Hey, sue me.

For the last couple of weeks Small has taken an interest in dressing up. He sees kids doing it on the tv and gets all excited and wants to do it too. The problem is that despite being over two and a half, The Prince of Dinkiness is only wearing clothes sized for a 18 month old. Dressing up outfits around here tend to come in size 3-6 years. Oh, not little girl outfits. You can get cute little fairy dresses or witch dresses or whatever for baby girls of all ages. Around Hallowe'en you can usually pick up some very sweet costume babygro things for babies and up to about 18 months but he's too old to wear a vampire baby gro for heaven's sake!

I suspect at this point you might be thinking "oh it doesn't matter if the outfits are a bit big, it's playing" or possibly "just make some costumes!" or even "do you know that on XYZ website they do really cute dressing up outfits for all sizes and I'm sure you'll find something there"


We saw some really gorgeous costumes in Costco the other week, there was a spaceman one Small was particularly taken with and even though it was quite dear Big at least would have given buying it serious consideration if they'd had one even approaching his size but they didn't. It's annoying.

Anyway, he's been particularly keen over the last couple of weeks to dress up as a ladybird. I've seen ladybird costumes but based around a black and red dress. I've seen bee costumes too (Small loves bees almost more than ladybirds) but again, dresses. Much as I disapprove of gender stereotyping and constricting a child's choice into Boys Things and Girls Things, I'm not going to put my son in a dress. Sorry.

Today I happened into Clare's Accessories, a shop I visit once a year maybe and was showing Small the witches hats stuck on hairbands that they do and generally messing about when I said to him "I know babe, it's not a ladybird outfit is it?" when the sharp eared sales assistant piped up "We do have ladybird stuff, it's over here" and directed me to a wall display with packets of wings, antennae hairband and ladybird wand (no, I didn't know ladybirds had wands either, but it's a bit reminiscent of a jester's stick so I like it) Sold to the woman with the cute insect fixated small boy. 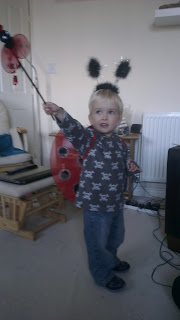 And he loves it
Posted by womanontheedge at 21:52