This morning, Big took Small out to the rather good playgym we discovered yesterday and left me at home so I could do what he thinks of as a rest and I know to be a rare opportunity to get some housework done without Small either screeching at either the noise interrupting his enjoyment of Justin's House or better yet, deciding to come and 'help'. I rarely have to worry about help from Big.

I got to thinking about a wee stooshie amongst a couple of friends on Facebook, which developed two heads and drew in a lot of opinions from all over the place. It was about, in essence, whether children are damaged by their mothers working.
Research can point either way, you can find studies which show that young children in daycare are better socialised, more independent, more educationally developed than those who stay at home with their mothers. At the same time, you can find research that shows how the abandonment issues involved can blight a child so badly that the adult they grow into is forever scarred.
Opinions raging in the debate ran from the idea that being a stay at home mum makes you boring to that being a working mum makes you feckless and selfish.

Myself, I walk the line. I do work, but I squeeze half a week's working hours into two days while Small goes to his grandparent's house. The amount I earn this way makes the difference between living hand to mouth, and pretty much getting by with the odd treat if planned for carefully but if I had to pay for childcare, like many families I'd be much worse off.

The debate has been raging on around me and what bothers me most is not so much the dire warnings about Small's future mental health - hell, I'm a parent! Everything I do is supposed to have a dire effect on my child's future mental health, it's what I'm for - it's that people queue up to have a pop at each other over decisions that have no bearing on them whatsoever. Being a parent is hard enough, being a mother, oooof. Perhaps I should have asked Big about this before writing but I don't know if fathers get the same sense of being watched and judged for every move they make. As a mother, everyone is looking. What your child eats, what they say, how they react, how they play, where they play, how they develop... it's all a reflection of your worth as a human being. If you can't get it right (and gods alone know what 'right' is supposed to be as everyone has a different version) then WHY DID YOU HAVE A CHILD IN THE FIRST PLACE?
So do other mothers then, understand this constant scrutiny and join you in a little solidarity? Um... no, they stick the boot in too. Harder.

No, that's not fair. This is the whole point. You can't say 'this is right' 'this is wrong' 'everyone does this' 'everyone reacts like that'. Well, you can but if you do then you're wrong. Everyone is different and responds differently. It's possible to say that your own child would be terribly affected if you didn't spend every waking moment with them but it's important to remember that someone else's child might only thrive when it's getting to meet new people every day. You can't say that a child will be protected from abandonment issues in later life if his mother stays home with him, if that mother can't interact with him and just leaves him to his own devices. Children have different personalities too, different needs, enjoy different things. Just as there are as many mums I know who are wonderfully supportive of each other, counterbalancing the times I see other parents attacking someone's choices.   It's important to recognise that before you dictate what someone else 'ought' to do with their offspring. Maybe it's not what you'd do, maybe you can't understand it but you're not that child's parent.

Anyway, what did I do with all this introspection? I finished the housework, and made cupcakes. 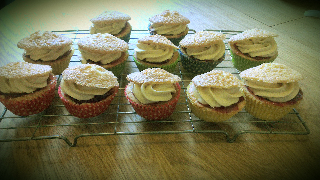