It's been a very long while since I last blogged. Returning to work full time, settling Small into nursery and then Christmas and all that is one reason. I also got a tablet computer round about the same time I stopped blogging so don't turn on the laptop everyday any more and well, blogging on a tablet isn't much fun. Excuses, excuses.

Anyway, I have something actually useful to blog about, so blog I shall.

Small was the happy recipient of a flurry of diggers, construction vehicles and a rather awesome and huge remote controlled crane this Christmas. We'd got him a wooden garage for his cars and watching him whizz the toy cars around that for hours on end made me think he would like something similar for his diggers but you can't buy anything like that. I mean, you can get tonka playsets and stuff like that but you can't buy a building site set up the way you can buy say, a road layout mat. So I decided to make one.

I started with a spare plastic wardrobe drawer from Ikea that we'd bought years ago. There didn't end up being room for it in the wardrobe and it's served as underbed storage in Small's room ever since but we don't need the things we're storing it anymore. It's fairly roomy but low and has a lid, so perfect for this job. 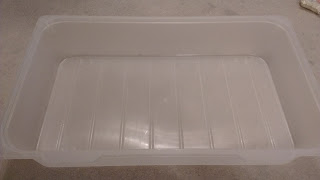 I have no extra time off around the standard bank holidays and I didn't want this to drag on and on so where as I could have done some proper planning and experimenting and plotting out to get the best possible result, I just forged ahead in a rush. Anyone else doing this could no doubt achieve much more professional results if they had the time.
We keep a roll or two of lining paper in the house for Small to draw and paint on as it's cheap and stands up to the saturation levels of paint and scrunching that a toddler deals in much better than say, printer paper. I decided to line out the box with some of that so that in time to come if Small decides he is no longer into diggers, I can turn it back into a regular storage box again simply enough. I taped it together with parcel tape but probably some wide, high tack masking tape would have better in hindsight.
I wanted a few different levels to the landscape and at first thought of papier mache. However, I haven't worked with papier mache since I was a child myself and wasn't sure either of the drying time or my skills in forming the effect I would need. Also, I wasn't sure it would stand up well to the attentions of a almost 3 year old. I had the wheeze instead of getting a can of expanding foam filler from the DIY shop and fished some likely looking bits of formed cardboard from the mountain of recycling we have now all the Christmas toys have been relieved of their packaging. 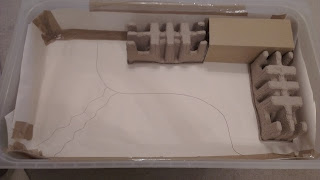 I arranged the cardboard in place and then marked out roughly where I wanted the filler to go in pen. I wanted to put a couple of digging mediums in the lowest level so marked in where I'd put filler for a divide between the two as well. 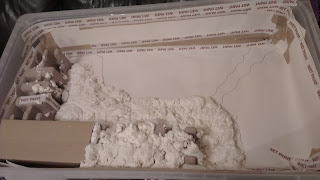 Spraying in the filler was fun. Lots of fun. I'd only bought a medium sized can and it didn't go quite as far as I thought it would but it did the bulk of what I needed. At the time, I thought perhaps I'd need a little papier mache in the end after all. Once it had finished it's expanding and hardened enough to be carved and I'd sculpted in a flat surface on the top two levels, I had enough bits cut off to glue down in the other areas and do the job. 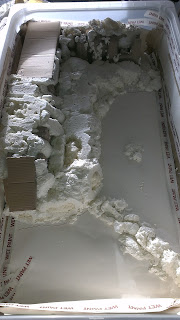 The next job was to paint. For speed and a fairly hardwearing finish, I used enamel spray paint, yellow for the ground level and brown for the upper two. Some grey might have been good too, but the paint was £4 a can and I was trying to keep the costs down. I'm not unhappy at all with the effect of just those two colours. Once the paint was dry, I added some flocked paper from the model shop, black tarmac effect for the road at the top and grass effect for the "walls" and road verges. If I was doing it again, I might have made a full cardboard foundation for the road and it's sweep down the incline and set it into the still wet filler for a better finish, but it's serviceable as it is. 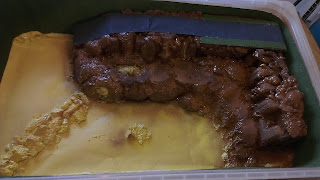 And that was pretty much that. I used a hot glue gun to do all my sticking down as it's fast and secure across all types of surfaces. I put some Moon Sand in the smaller section of the ground level and a mixture of dried beans and split peas in the larger section. As I had a few small pebbles hanging around from projects past, I threw them in too. I imagine that some well washed, rounded fish tank gravel would also work well. 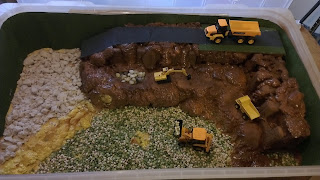 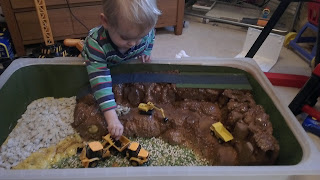 I got all the materials I needed on Saturday afternoon, from either a DIY shop or a specialist model shop, total spend less than £20. It was ready for presenting to Small by 3pm on Sunday. He loves it and played with it for four hours solid until bedtime, with a brief pause to eat his tea. It's still in once piece, so I'm calling it a win.
Posted by womanontheedge at 19:23